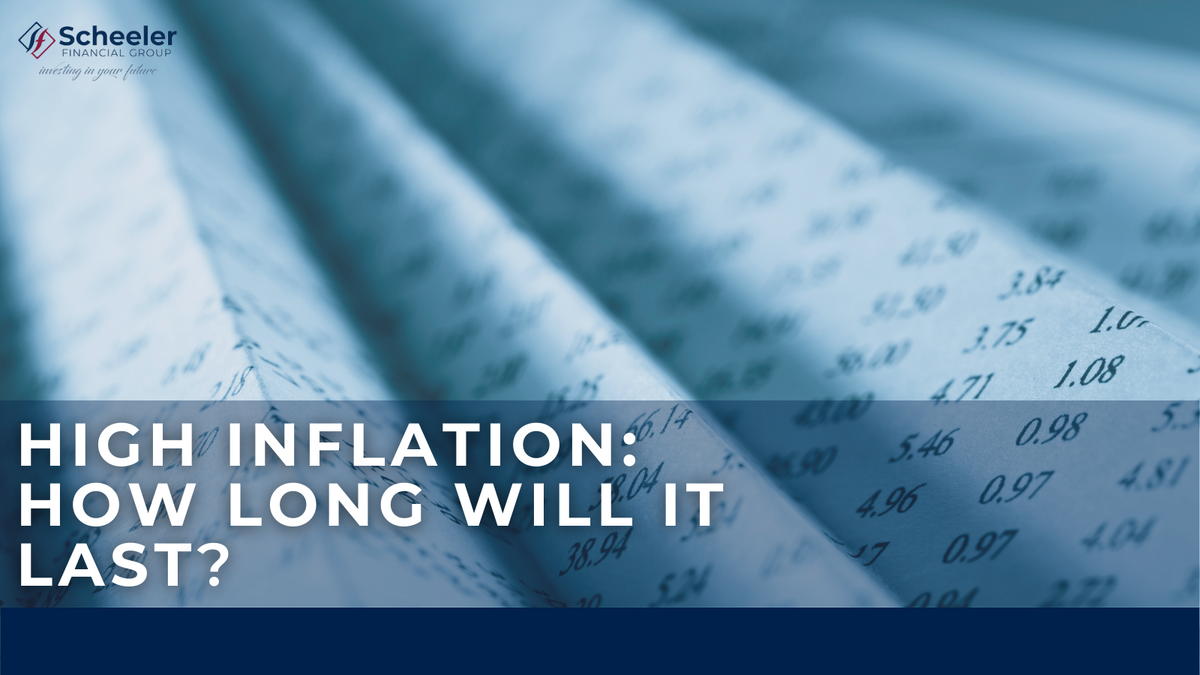 High Inflation: How Long Will It Last?

In March 2022, the Consumer Price Index for All Urban Consumers (CPI-U), the most common measure of inflation, rose at an annual rate of 8.5%, the highest level since December 1981.1 It's not surprising that a Gallup poll at the end of March found that one out of six Americans considers inflation to be the most important problem facing the United States.2

When inflation began rising in the spring of 2021, many economists, including policymakers at the Federal Reserve, believed the increase would be transitory and subside over a period of months. One year later, inflation has proven to be more stubborn than expected. It may be helpful to look at some of the forces behind rising prices, the Fed's plan to combat them, and early signs that inflation may be easing.

The fundamental cause of rising inflation continues to be the growing pains of a rapidly opening economy — a combination of pent-up consumer demand, supply-chain slowdowns, and not enough workers to fill open jobs. Loose Federal Reserve monetary policies and billions of dollars in government stimulus helped prevent a deeper recession but added fuel to the fire when the economy reopened.

More recently, the Russian invasion of Ukraine has placed upward pressure on already high global fuel and food prices.3 At the same time, a COVID resurgence in China led to strict lockdowns that have closed factories and tightened already struggling supply chains for Chinese goods. The volume of cargo handled by the port of Shanghai, the world's busiest port, dropped by an estimated 40% in early April.4

Although the 8.5% year-over-year "headline" inflation in March is a daunting number to consider, monthly numbers provide a clearer picture of the current trend. The month-over-month increase of 1.2% was extremely high, but more than half of it was due to gasoline prices, which rose 18.3% in March alone.5 Despite the Russia-Ukraine conflict and increased seasonal demand, U.S. gas prices dropped in April, but the trend was moving upward by the end of the month.6 The federal government's decision to release one million barrels of oil per day from the Strategic Petroleum Reserve for the next six months and allow summer sales of higher-ethanol gasoline may help moderate prices.7

Core inflation, which strips out volatile food and energy prices, rose 6.5% year-over-year in March, the highest rate since 1982. However, the month-over-month increase from February to March was just 0.3%, the slowest pace in six months. Another positive sign was the price of used cars and trucks, which rose more than 35% over the last 12 months (a prime driver of general inflation) but dropped 3.8% in March.8

For the 12 months ended in March, average hourly earnings increased 5.6% — not enough to keep up with inflation but enough to blunt some of the effects. Lower-paid service workers received higher increases, with wages jumping by almost 15% for non-management employees in the leisure and hospitality industry. Although inflation has cut deeply into wage gains over the last year, wages have increased at about the same rate as inflation over the two-year period of the pandemic.9

One of the big questions going forward is whether rising wages will enable consumers to continue to pay higher prices, which can lead to an inflationary spiral of ever-increasing wages and prices. Recent signals are mixed. The official measure of consumer spending increased 1.1% in March, but an early April poll found that two out of three Americans had cut back on spending due to inflation.10-11

The Federal Open Market Committee (FOMC) of the Federal Reserve has laid out a plan to fight inflation by raising interest rates and tightening the money supply. After dropping the benchmark federal funds rate to near zero in order to stimulate the economy at the onset of the pandemic, the FOMC raised the rate by 0.25% at its March 2022 meeting and projected the equivalent of six more quarter-percent increases by the end of the year and three or four more in 2024.12 This would bring the rate to around 2.75%, just above what the FOMC considers a "neutral rate" that will neither stimulate nor restrain the economy.13

Fed policymakers have signaled a willingness to be more aggressive, if necessary, and the FOMC raised the funds rate by 0.5% at its May meeting, as opposed to the more common 0.25% increase. This was the first half-percent increase since May 2000, and there may be more to come. The FOMC also began reducing the Fed's bond holdings to tighten the money supply. New projections to be released in June will provide an updated picture of the Fed's intentions for the federal funds rate.16

The question facing the FOMC is how fast it can raise interest rates and tighten the money supply while maintaining optimal employment and economic growth. The ideal is a "soft landing," similar to what occurred in the 1990s, when inflation was tamed without damaging the economy. At the other extreme is the "hard landing" of the early 1980s, when the Fed raised the funds rate to almost 20% in order to control runaway double-digit inflation, throwing the economy into a recession.18

Fed Chair Jerome Powell acknowledges that a soft landing will be difficult to achieve, but he believes the strong job market may help the economy withstand aggressive monetary policies. Supply chains are expected to improve over time, and workers who have not yet returned to the labor force might fill open jobs without increasing wage and price pressures.19

The next few months will be a key period to reveal the future direction of inflation and monetary policy. The hope is that March represented the peak and inflation will begin to trend downward. But even if that proves to be true, it could be a painfully slow descent.

Please note: Projections are based on current conditions, are subject to change, and may not come to pass.

Content in this material is for general information only and not intended to provide specific advice or recommendations for any individual. All performance referenced is historical and is no guarantee of future results. All indices are unmanaged and may not be invested into directly.

The information provided is not intended to be a substitute for specific individualized tax planning or legal advice. We suggest that you consult with a qualified tax or legal professional.

This article was prepared by Broadridge.